Welcome to the first of ‘EAT YOUR VEGGIES!’ series!

If you were to describe taste of vegetables, how would you describe it? Often, ‘Bitter’ would come to mind first more than the rest. Don’t be shocked, apparently, as children, we’re biologically designed to dislike bitter taste, thus, dislike vegetables. But as we grow up, some of us develop a taste for it, and thankfully, I did too!

This dish I’m about to present to you is often served at my home, and my mother called it ‘SELADA PADANG’. With a quick search of google, I found out that (the supposedly) authentic version uses potato and eggs for the base of the dressing. But my version has no potato in it. So it’s only fair I give this dish a whole new name right? ;)

So, here it is, KEWKUMBAH SAHLAD.
……
(that doesn’t sound as cool as I’d expected)
…
Okay, let’s just call this an EASY SALAD. 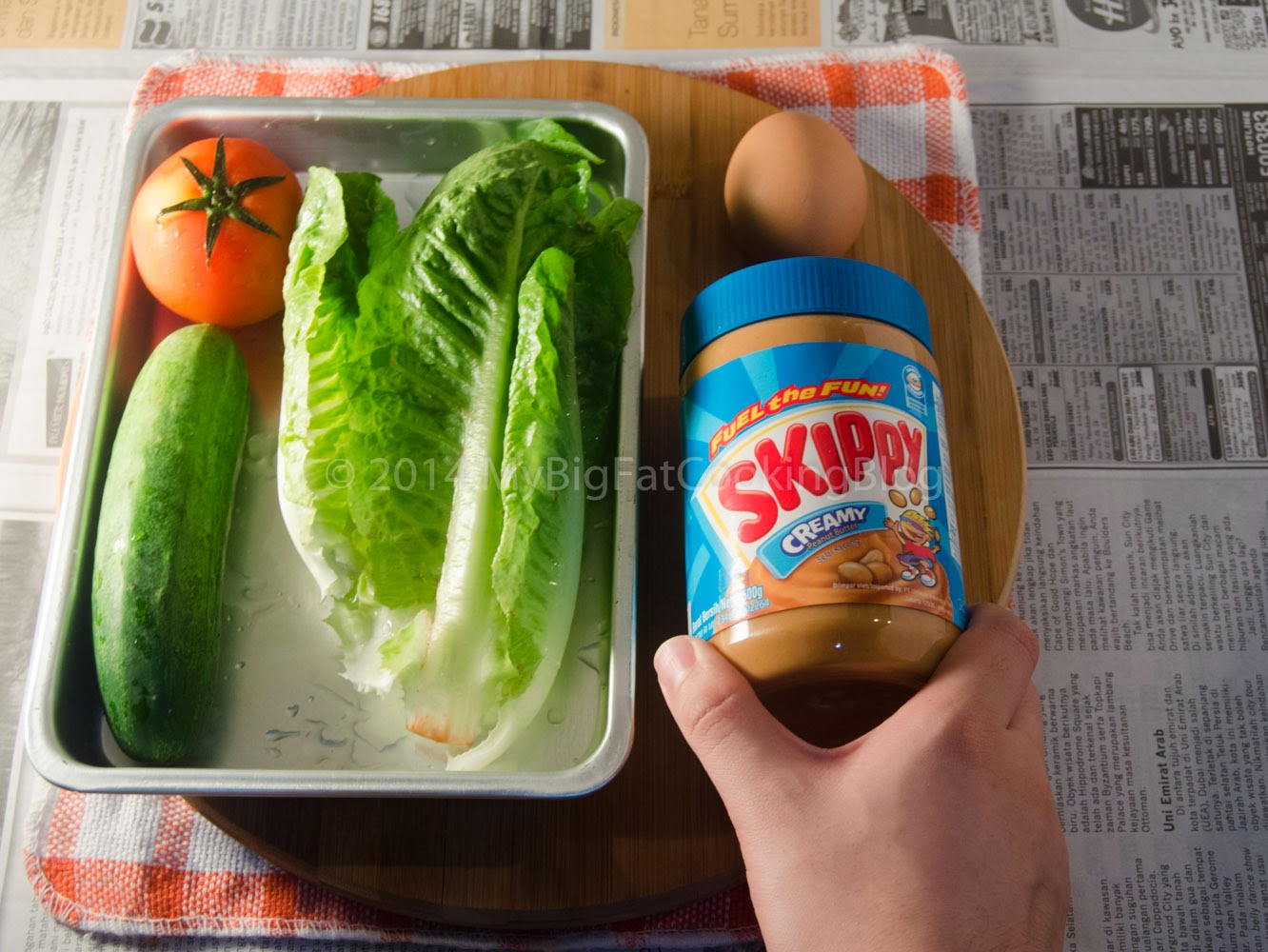 1 tbsp of smooth peanut butter. Or chunky, if you like a bit of a bite.
1 tbsp of sugar
2.5 tbsp of white vinegar.
Salt to taste
Pepper to taste

Step 1 – Peel the cucumber. Make it fancy by making a large space between each peel, making it look like a zebra mark. Nothing says fancy like…you know, stripes. After peeling, slice it in half, and use a spoon to discard the watery-seeds. Use a paper towel to wipe the insides of the cucumber dry. Set it aside. 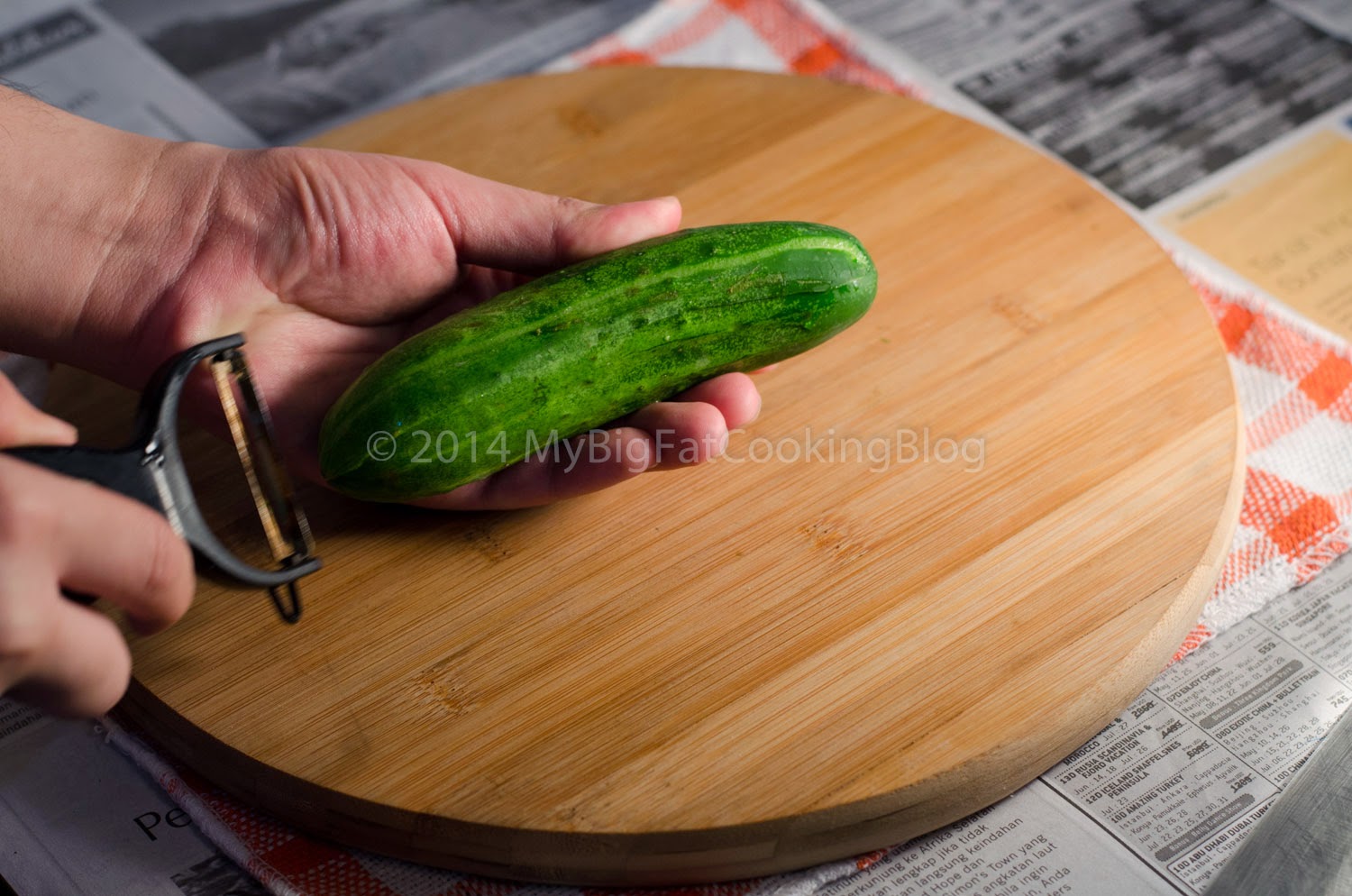 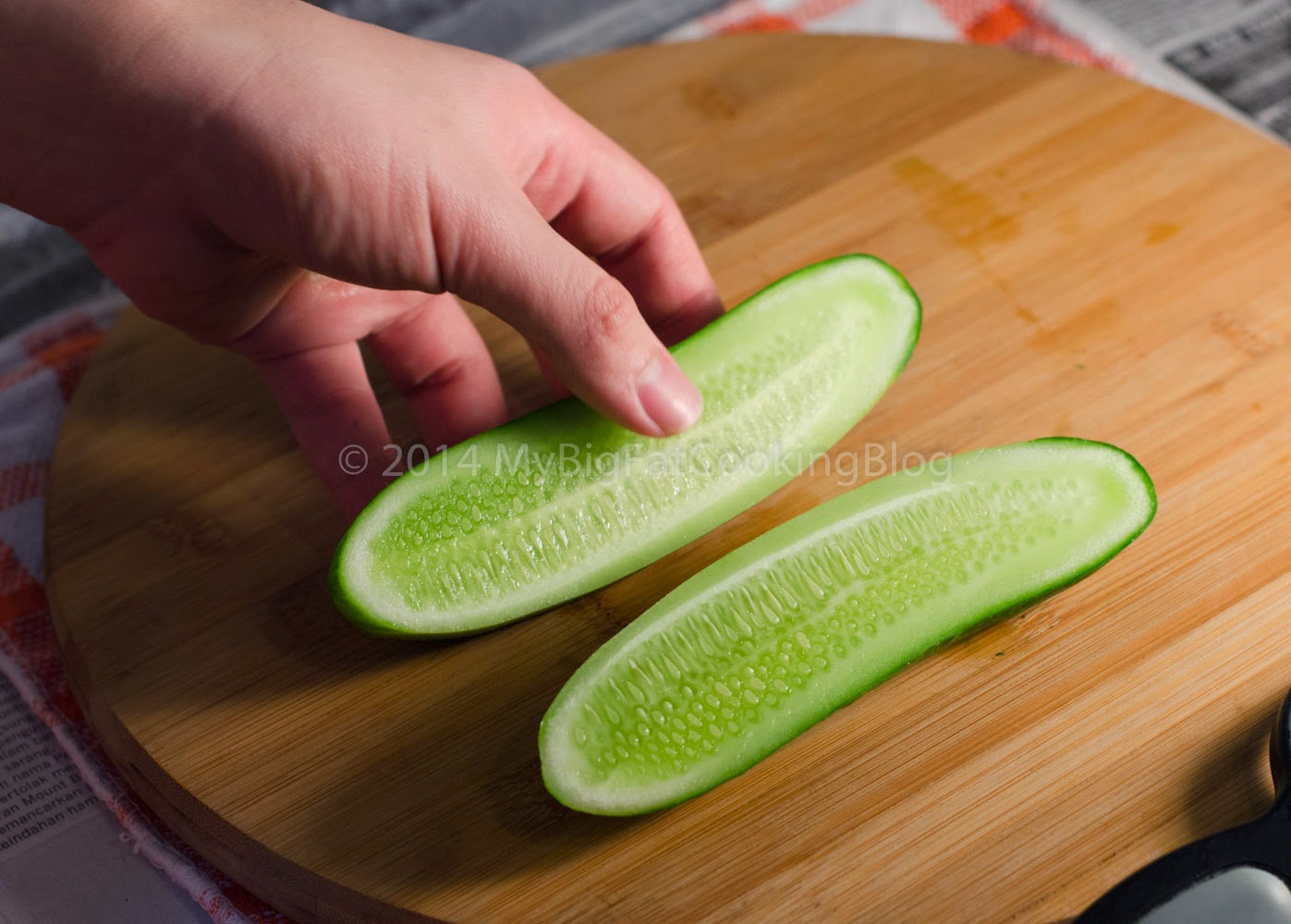 Step 2 – Slice your tomato into small cubes. This thing is a watery-mess. I never liked it. But it tasted awesome. If you never tasted a fully ripened tomato, you are truly missing some of the best part in life. Set it aside. Also sliced your Romaine lettuce to bite sized pieces 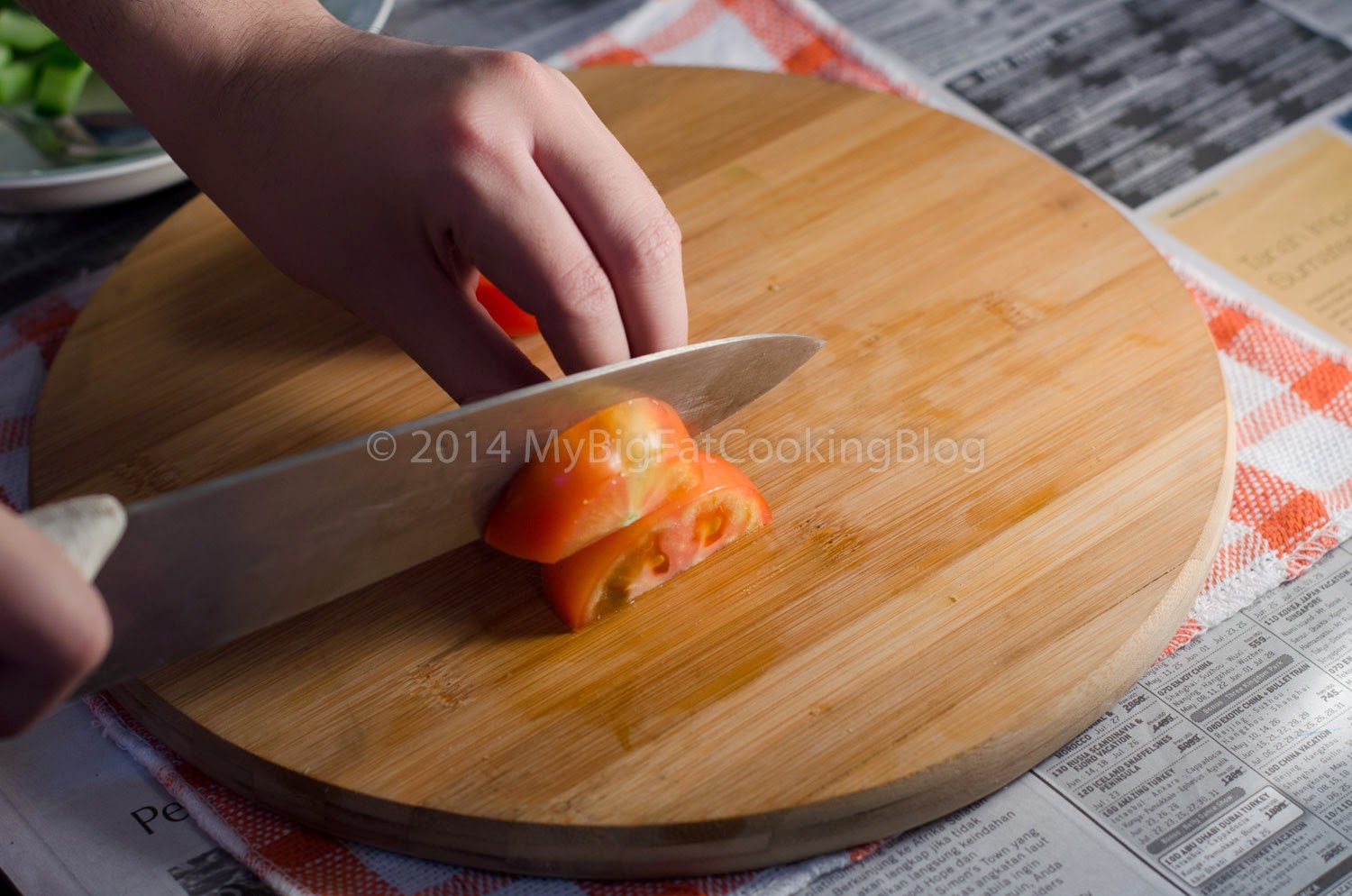 Step 3 – Slice your hard boiled eggs in half. Pinch each half to release the yolk. Keep the yolks for the dressing later, and slice the whites thinly.

Step 4 – Prepare your dressing. Now, my mother told me, the secret to the great dressing for this recipe lies on….care for a guess? Yep. EGG YOLK. An egg yolk taken from a boiled whole eggs are the key to the creaminess. Get a bowl and throw your egg yolk, peanut butter, vinegar, sugar, and salt in it. Mix it thoroughly. Mix it in and whip it hard until it becomes a smooth paste.

Step 5 – Combine everything. Use a spoon, and fold the dressing to the cucumber, lettuce, and tomatoes. Be gentle. Think like going on a first date with a girl. You’re not going on a limb here and talk about sex or marriage straight away, rather taking it slow with a chit chat about passion and music. See what I meant? Oh, and the egg whites goes last. 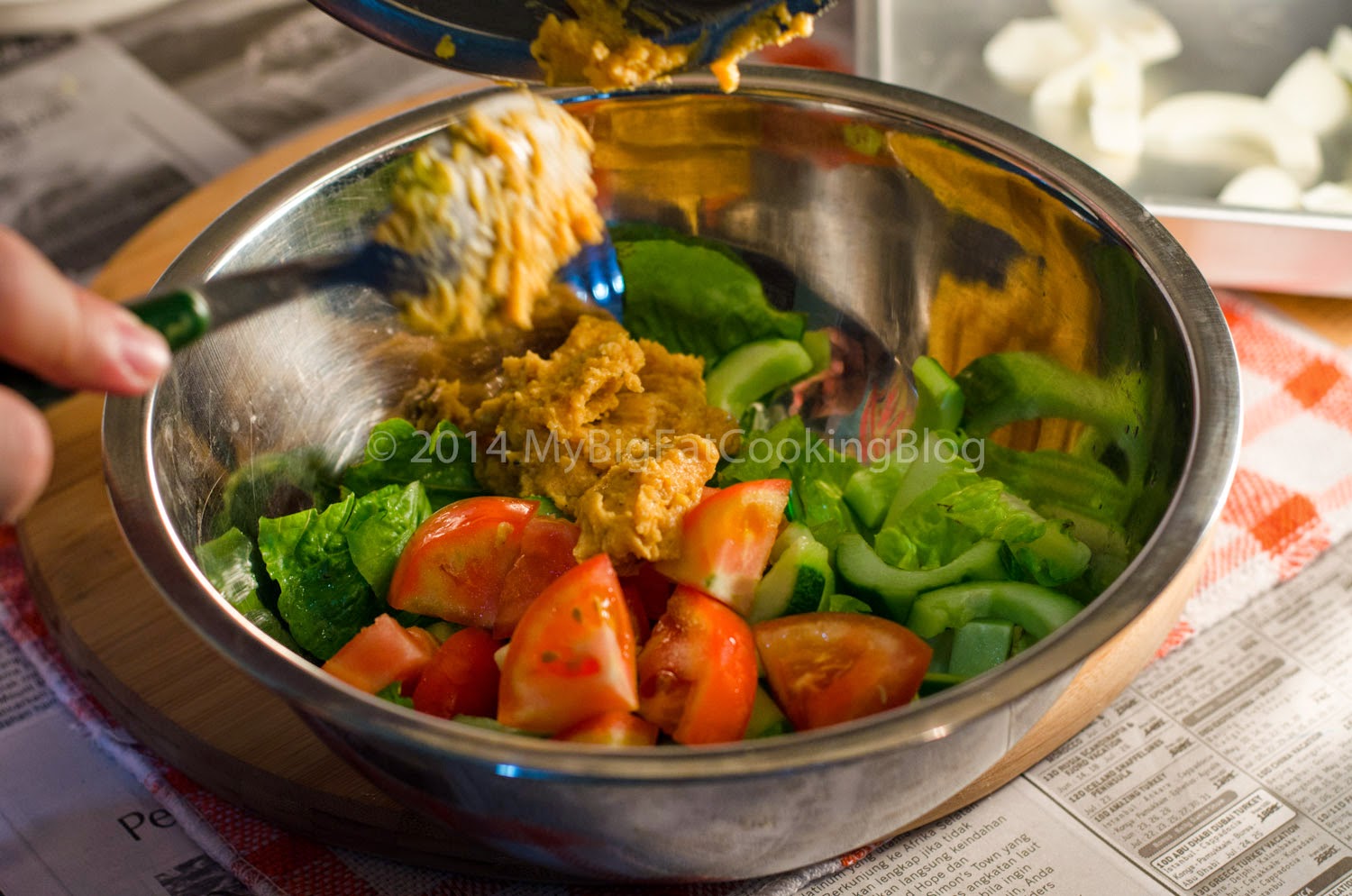 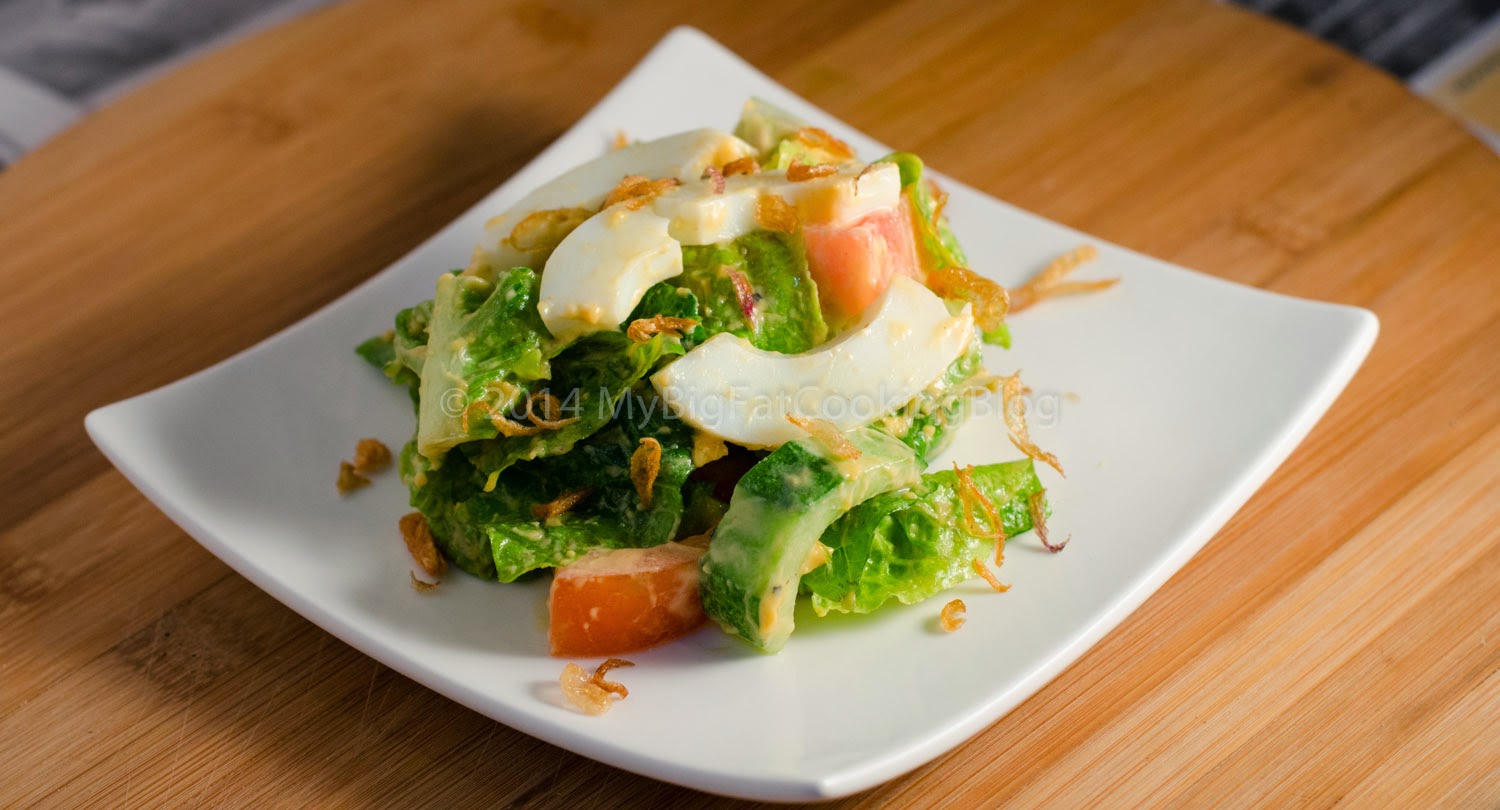 This simple salad is a staple in my household. Usually, it accompanies a deep fried Pomfret because the salty-creamy-almost-sourish taste complements the flavor perfectly.
A tip I never forget whenever I’m making a salad is always taste the dressing. You’ll never know how it tastes like unless you tried it yourself. Remember, not everyone is fond of sour taste.
Give this a go, go and make your parents proud. Stand tall, scream on top of your lungs.
“I JUST ATE VEGETABLES!”

xx
Posted by My Big Fat Cooking Blog at 9:43 PM