Holy moley, my Japan trip was a blast!! Going to Japan during the Winter/New Year Holiday is easily the best AND worst thing to happen. Why is it ‘worst’ you might ask? NY Holiday in Japan is almost the same as Ied Holiday here in Indonesia; Most shops and sights are closed, and people are flooding the temple (which is one of the sights you probably want to see), and it’s a point-of-no-return situation if you ever got stuck inside the crowds. But nonetheless, it was friggin’ majestic.

I tasted a lot of Japanese local food while I was there. I managed to try Japanese Natto, Soba, Ramen, Udon, Tempura, Katsu, Crab Legs (This thing is the bomb!), and the ever so famous Harajuku Crepes. But for me, The breakfast in my hotel in particular was exquisite. Oh yeah, I stayed at Washington Hotel over at Akihabara. It was 3 stars I think, but the standard was far higher than 3 stars hotel in Indonesia. The breakfast buffet costs ¥1.300, and it offers a wide array of Japanese cooking. If you’re a fan of western style breakfast, you’ll probably be disappointed.

Now, since I’m still on a state of Hangover from my Japan trip, I’m going to show you how to cook (probably) one of the easiest Japanese dish you can do, CHICKEN TERIYAKI.

‘Teriyaki’ is a method of Japanese cooking in which foods are broiled/grilled with a glaze made from Sake, Soy Sauce, Mirin and Sugar. Simple as fuck ain’t it?

Here’s everything you need: 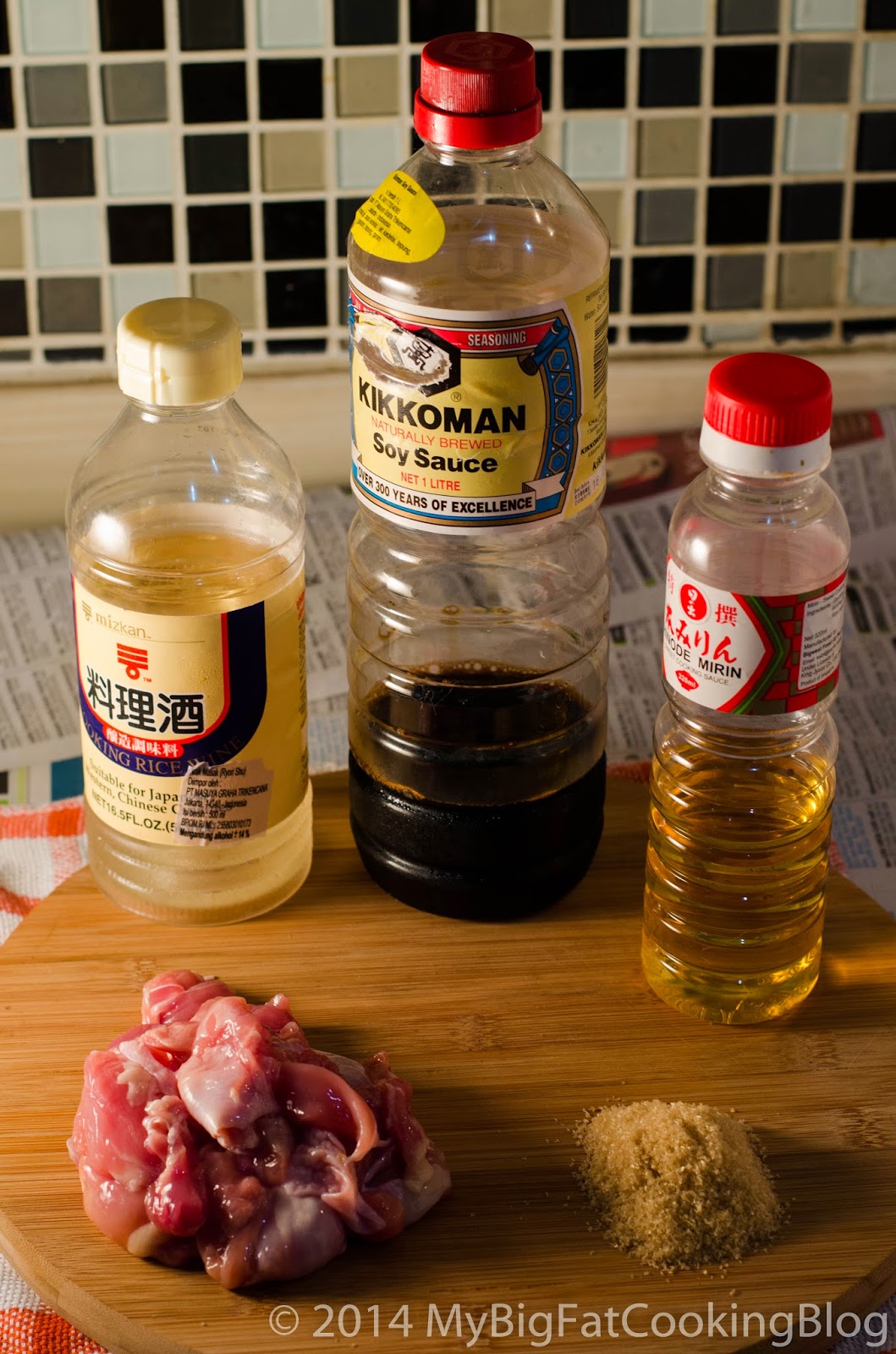 200 grams of Chicken Thigh Fillets. It HAS to be from the thigh, breast won’t do it because it has less fat content.
2 tbsp of Mirin
1 tbsp of Sake
1 tbsp of Japanese Soy Sauce
1 tbsp of Brown Sugar. Feel free to substitute with white sugar if you don’t have brown sugar.

Step 1 – Fillet your chicken thigh if you haven’t done so. For those who got creeped with the thought of deboning a chicken, ask your butcher to do so, making 2 cm cut of bite size pieces. Set aside for a while. Don’t forget, like I always said in previous post, always ensure the chicken are in room temperature before you cook it ;)

Step 2 – Get a small bowl and pour in your sugar, sake, mirin, and soy sauce. Stir to combine, set aside. 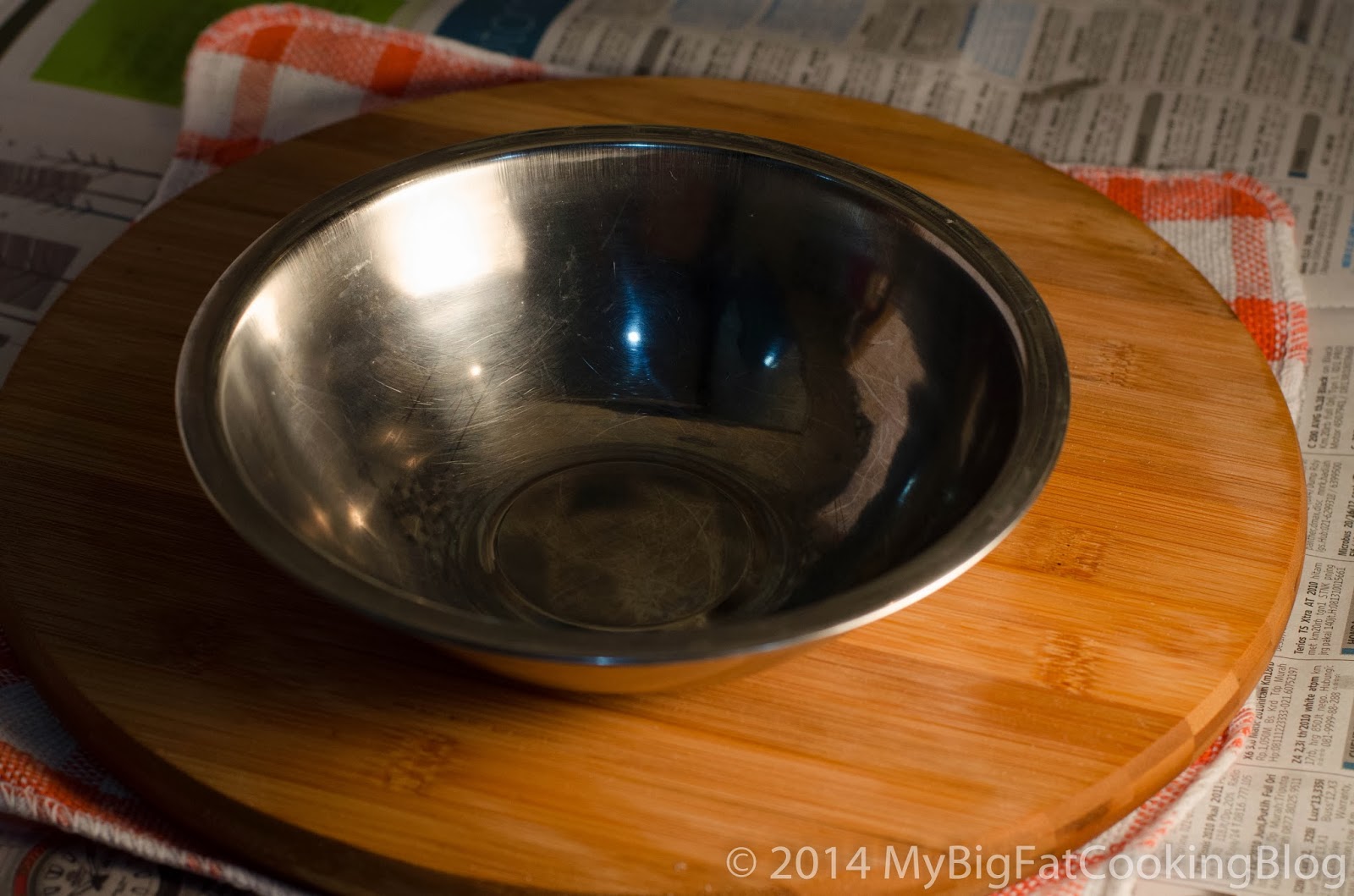 Step 3 – Heat your non-stick pan on medium high heat. Since I have chicken skin from my fillet process earlier, I’m going to use it instead of oil. After all, chicken fat ALWAYS tasted better than oil x) 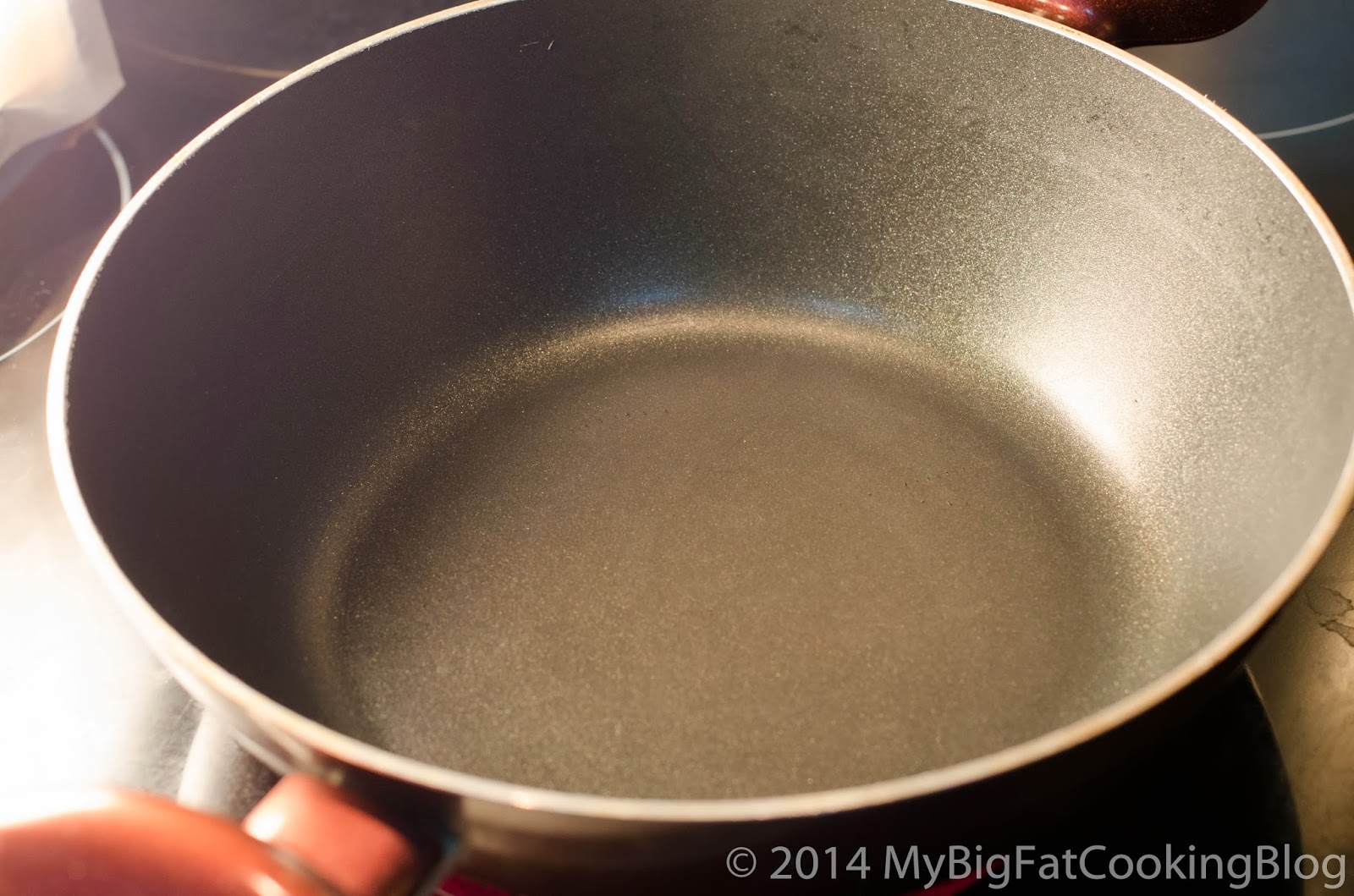 Step 4 – Throw your chicken skin in, let it cook until the fat dissolves into oil. This should take around 2-3 minutes. Once the skin turns golden brown and there's melted chicken fat all over the pan, take it off. 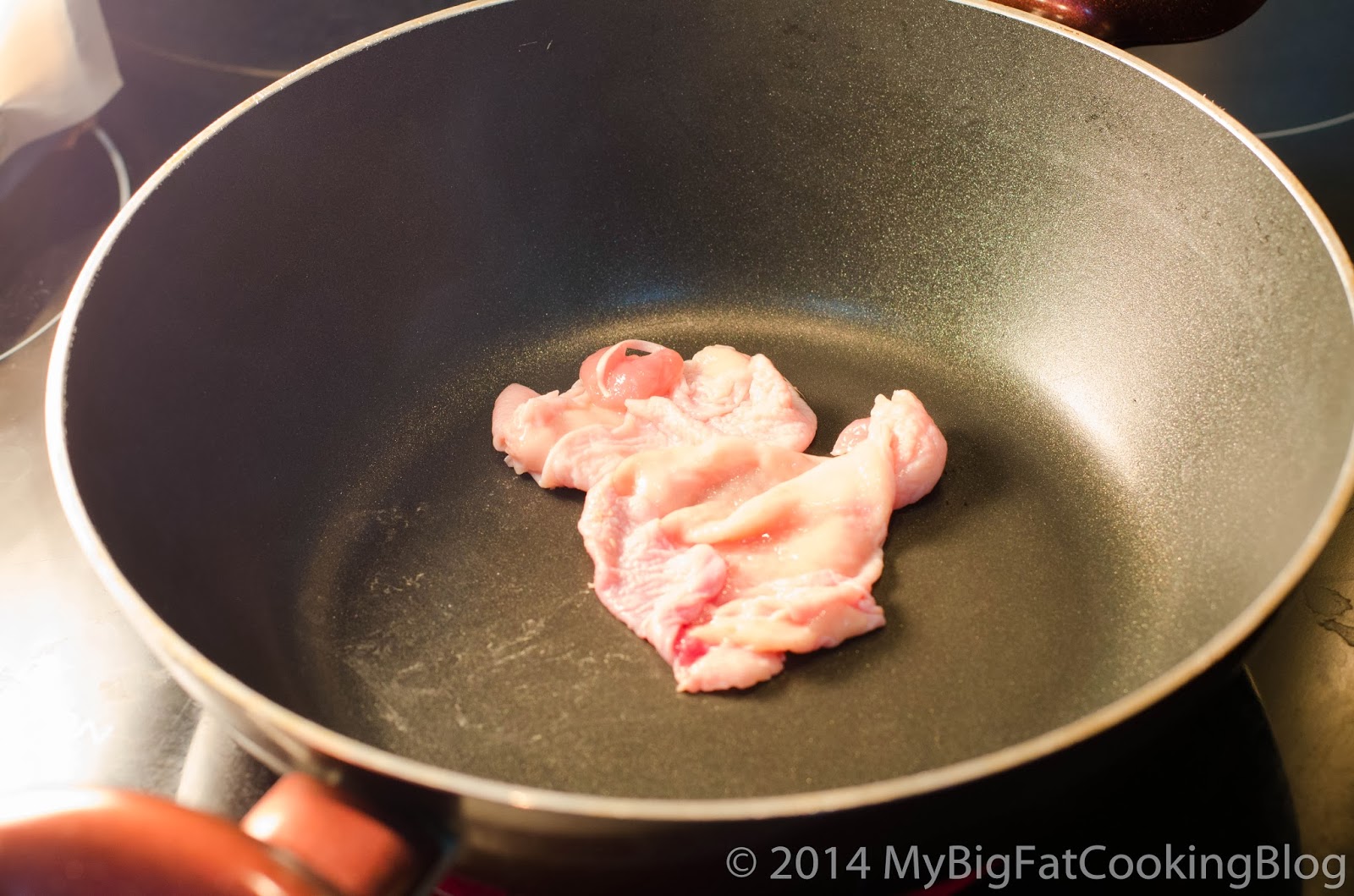 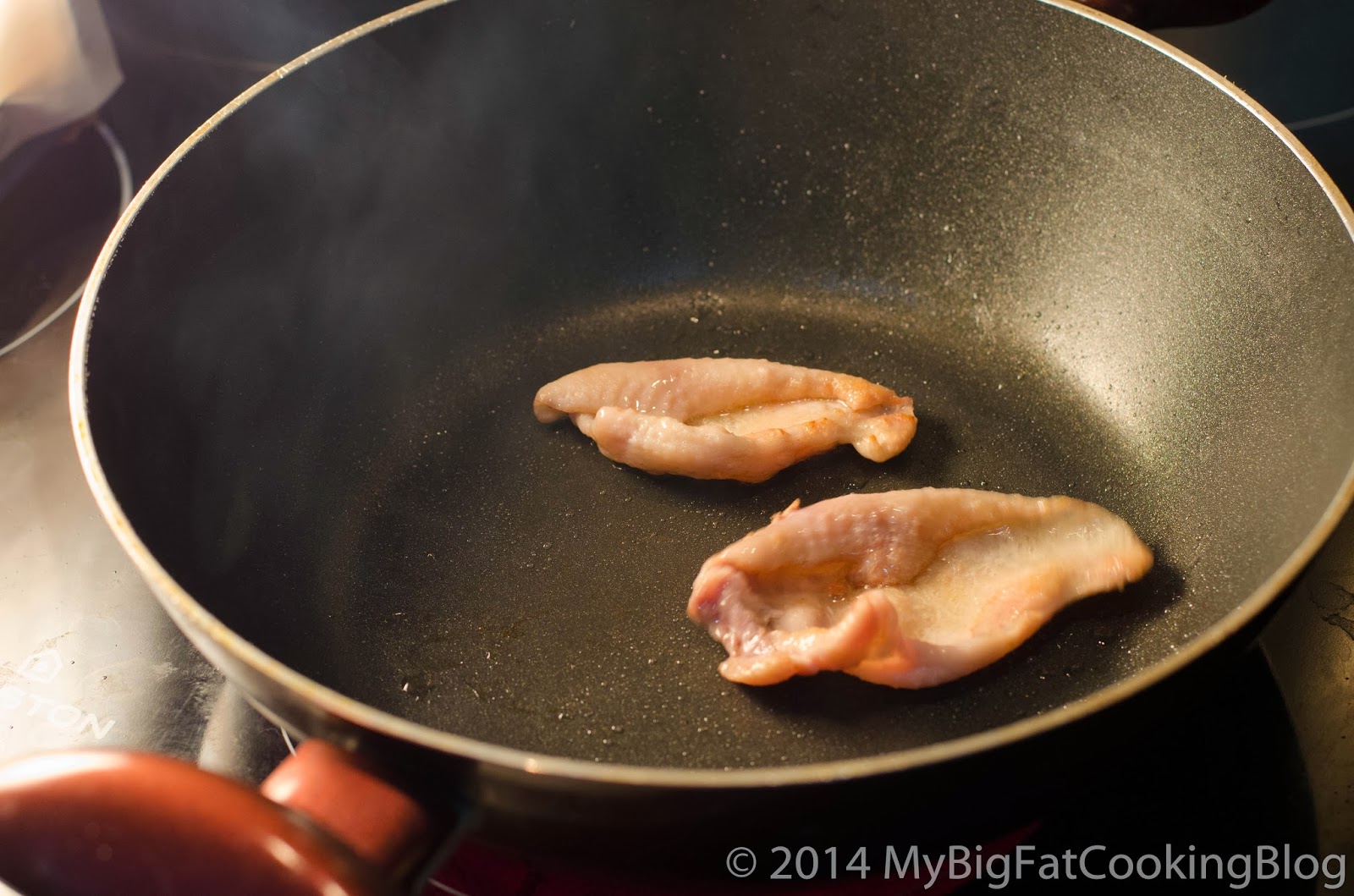 Step 5 – Throw your chicken thigh in, and let it sit for around 1,5 minutes to caramelize. 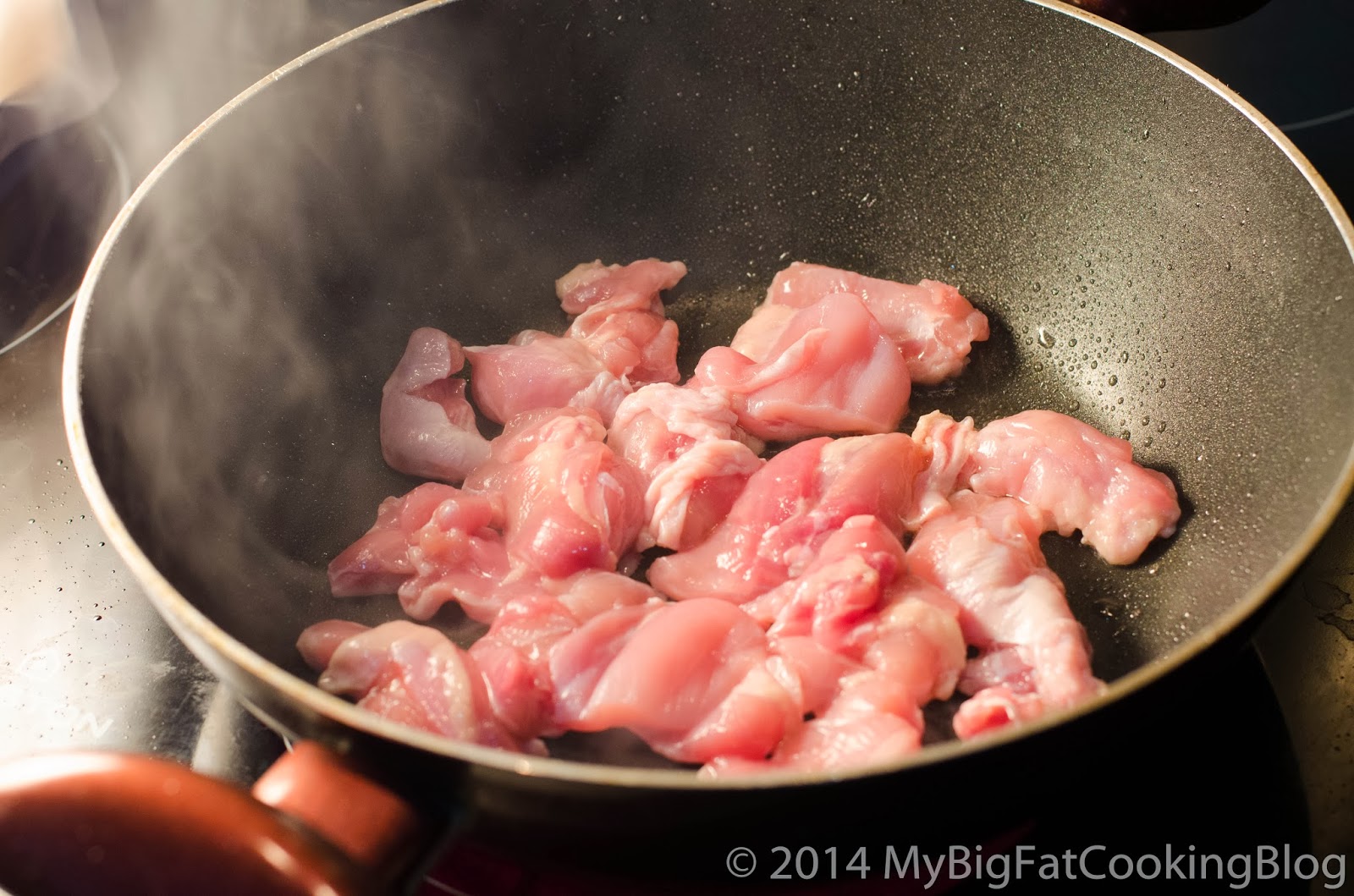 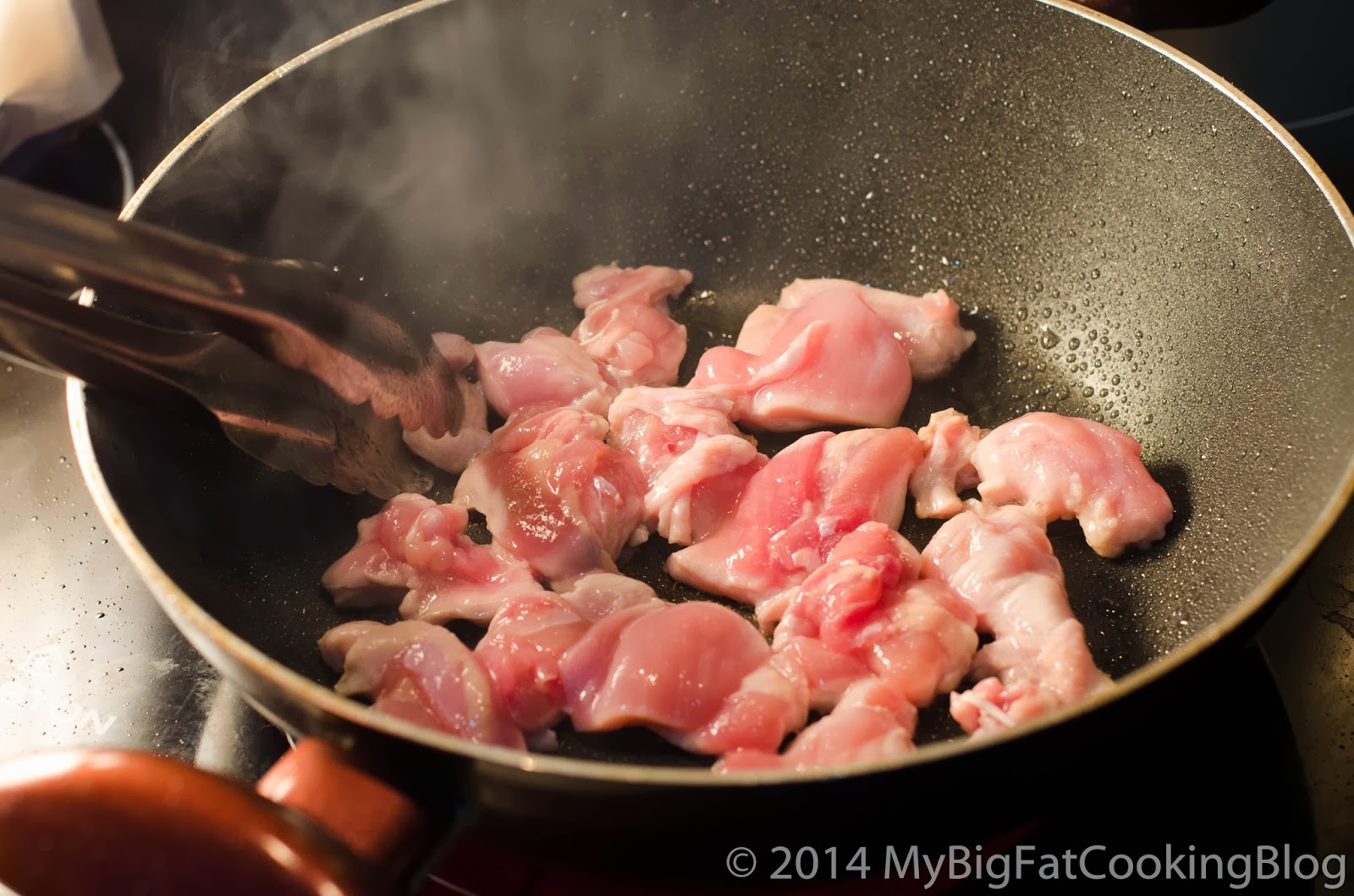 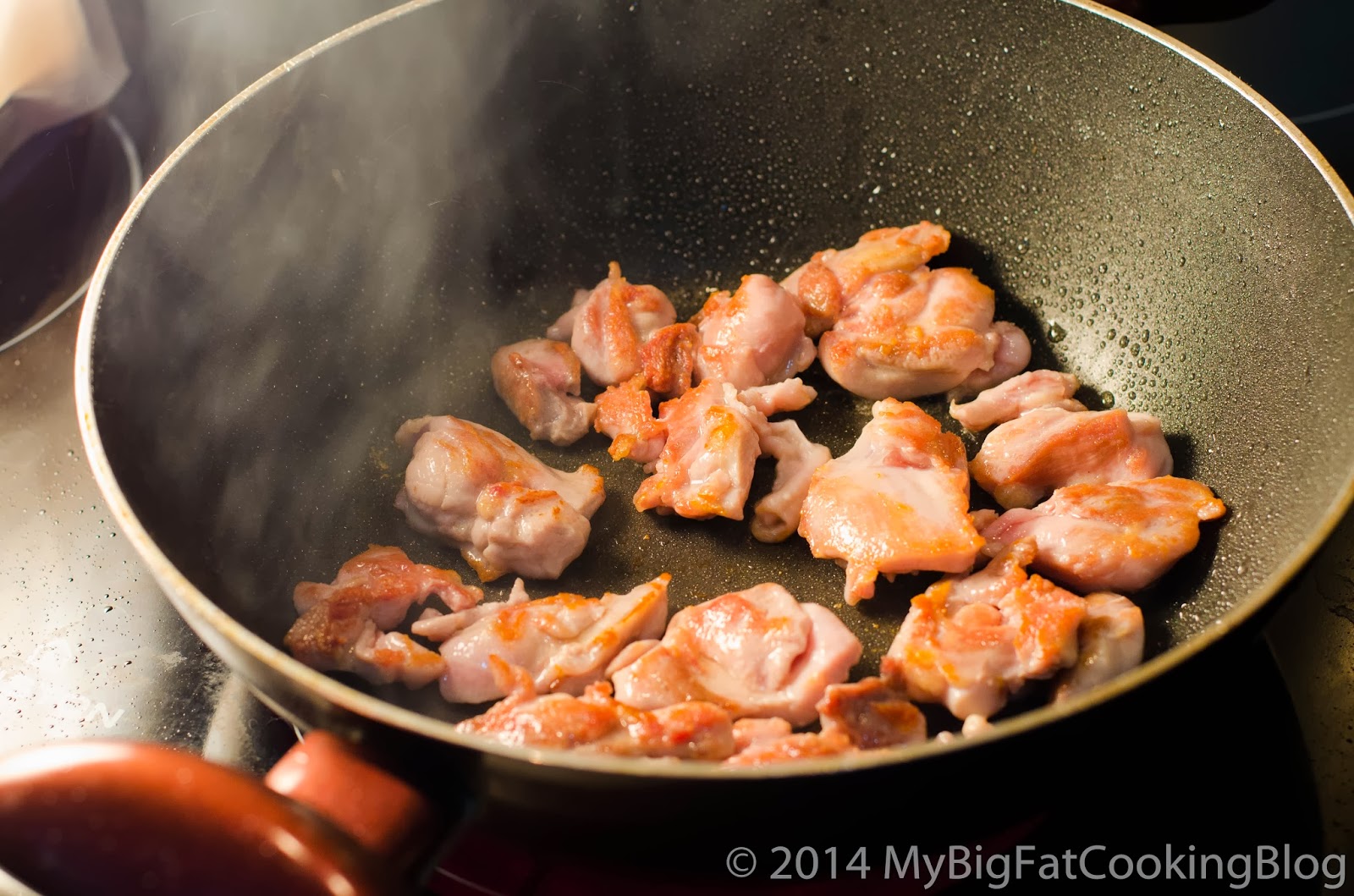 Step 7 – Throw your teriyaki sauce mix in, and stir. At this point, turn the heat down to low. Let the sauce simmer until it becomes sticky, and no excess liquid visible 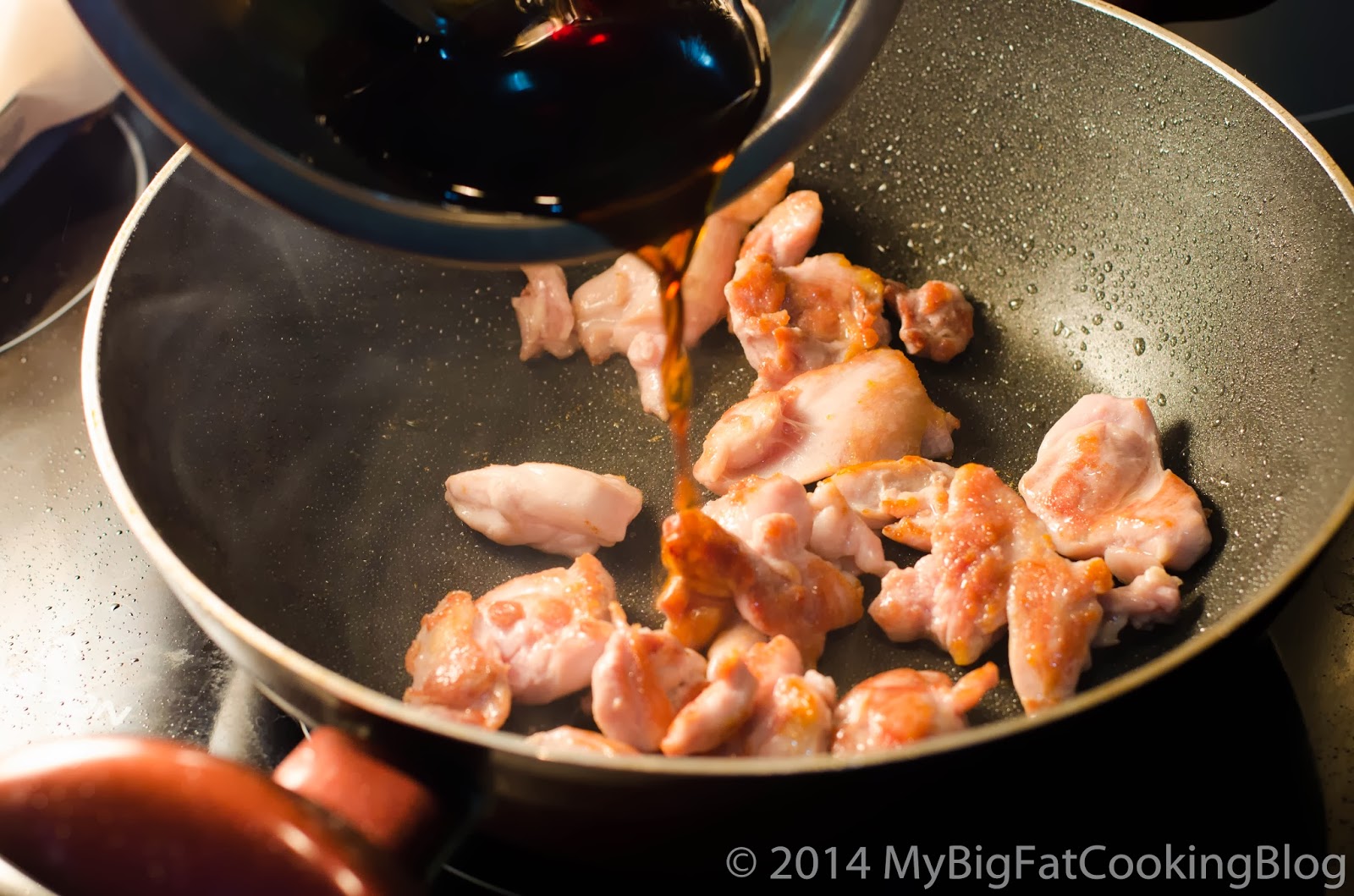 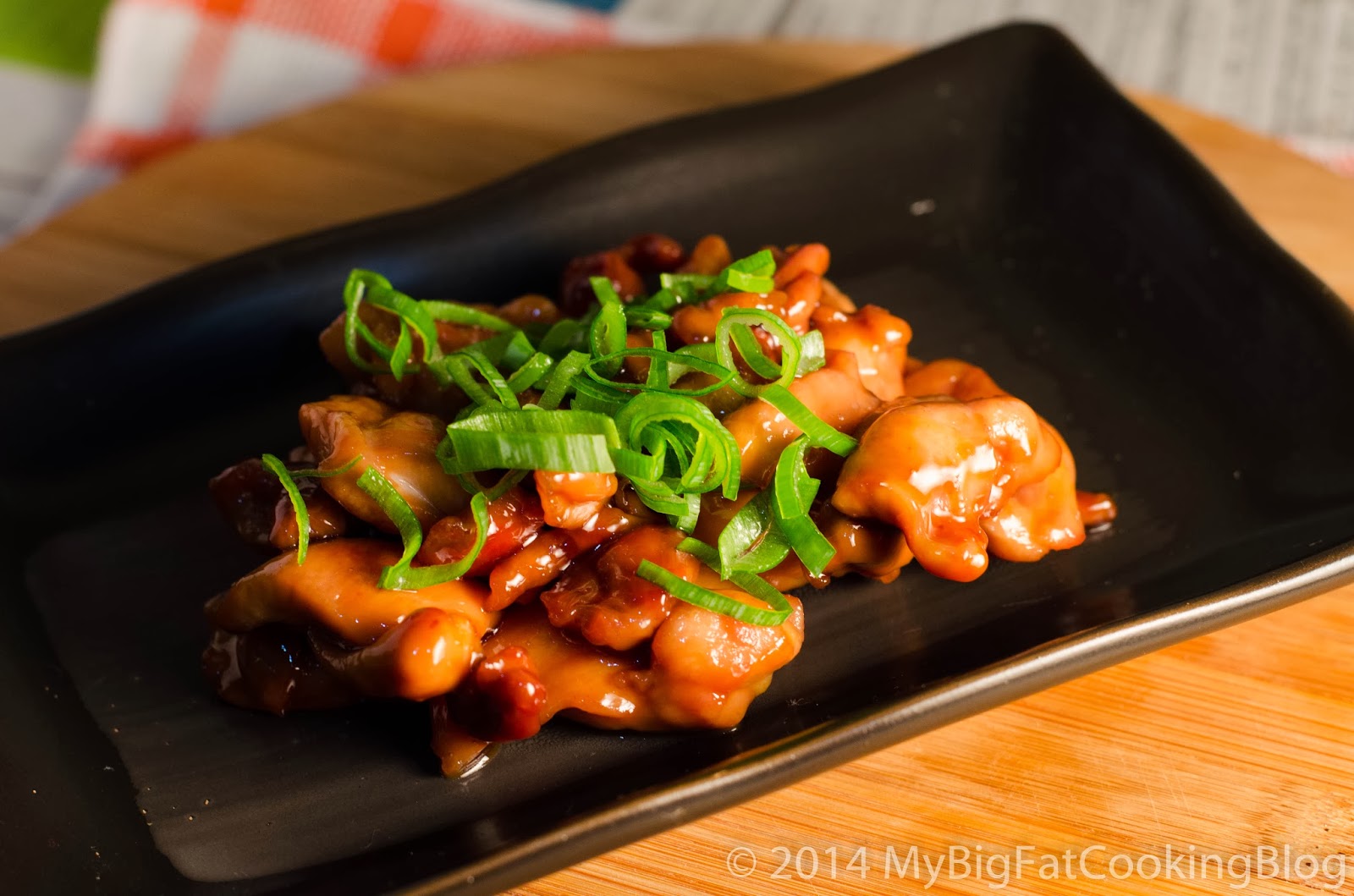 Ah, this is without a doubt my favorite Japanese dish ever. Eat this with hot white rice and go explore the savory heaven.

Posted by My Big Fat Cooking Blog at 6:31 PM